Sprinkler Repair for all aspects of Residential Sprinkler Systems

If you have water standing in your back yard after a hard rain, or  If water stands on your driveway or sidewalk, we can help with all types or Residential Drainage and Standing Water problems.

Oklahoma Drainage and Sprinkler Repair has over 26 years of Experience Solving all types of Storm Water issues.  We utilize French Drains, Surface Drains and Channel Drains.  Our Drains are installed in Yards, Sidewalks, Driveways and Basements.

Some Drainage Systems are complex and incorporate several types of drains.  Most Drainage Systems , however are basic and require just one type of Drain.  Oklahoma Drainage and Sprinkler Repair installs a variety of drains to solve a variety of problems. French Drains, Surface Drains, and Channel Drains are most commonly used.  If you live in Edmond and need a Channel Drain installed across your driveway, or if you live in Norman and need a French Drain in your backyard, or if you live in Oklahoma City and need a Surface drain installed next to your sidewalk, we can help. 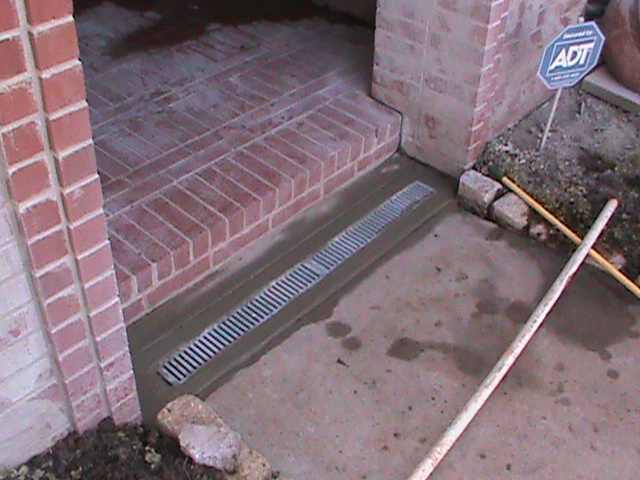 Channel Drains are one kind of Surface Drain that we install in concrete.

The most common Drain that we install is the French Drain.  This is because the French Drain is versatile.  It can handle Surface Water Problems or Underground Water Problems (sub-surface).  A huge mistake that many people make is assuming that water gets to a Problem Drainage Area by flowing over the surface only.  For example, if water is flowing down hill underground toward your home’s foundation, the only way to stop or intercept it is with a French Drain.  Water can flow laterally into a perforated French Drain Pipe.  It is then diverted away from the Problem Drainage Area to an Exit Point.

Popup Emitter to release water from a French Drain in Yukon

A  French Drain is completely different from a Surface Drain.  A basic French Drain consists of a Perforated Drain Pipe in the bottom of a trench.  A  Trench Liner is sometimes used depending on the Drainage System Design and the type of soil.   The Drain Pipe should have a neoprene sock around the Perforated Drain Pipe.   This is to ensure that the Drain Pipe does not become clogged. A trench is dug that is slightly wider than the French Drain Pipe that is being used.  There are several sizes of French Drain Pipe.   Three Inch, Four Inch, and Six Inch are the most common sizes of French drain Pipe. The dirt that is taken out to make the trench is hauled away.  It is replaced by some type of small stone or gravel depending on what is desired or available.  I prefer crushed 1 inch lime stone.  It is the most economical option in my area.  Pea Gravel or some other type of small stone can work just as well.    The lime-stone or gravel is placed in the trench on top of the perforated Drain Pipe and filled all the way to the surface (ground level).   In some cases where the French Drain needs to be deep or is being placed in sandy soil, a special trench liner must be placed in the trench before the perforated Drain Pipe or the Gravel are installed.  This helps maintain the integrity of the trench over time.  It also increases the cost of the French Drain and the amount of time to install it.  I install a trench liner in a French Drain about 20% of the time.  Most of the time a liner in not needed. 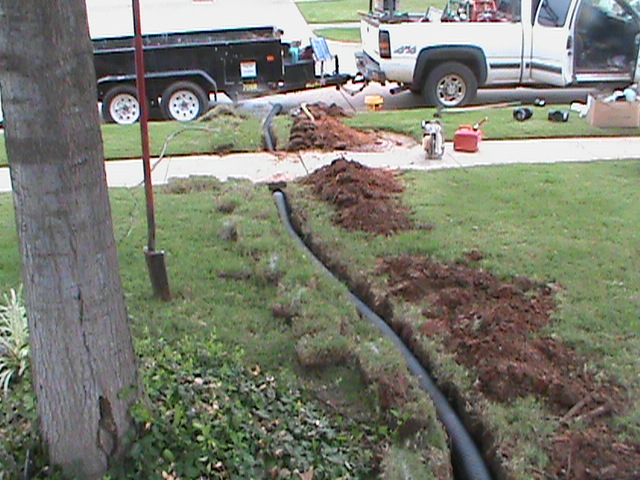 Pipe running to street form French Drain in back yard. 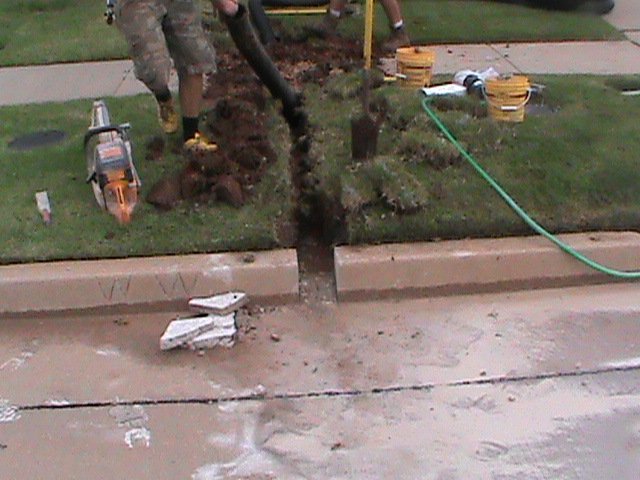 Installing a Curb Outlet for a French Drain in Oklahoma City

B.  Leave the French Drain as-is, but decorate it with stepping stones or landscaping rocks.  Many French Drains are hidden under rock walk ways. 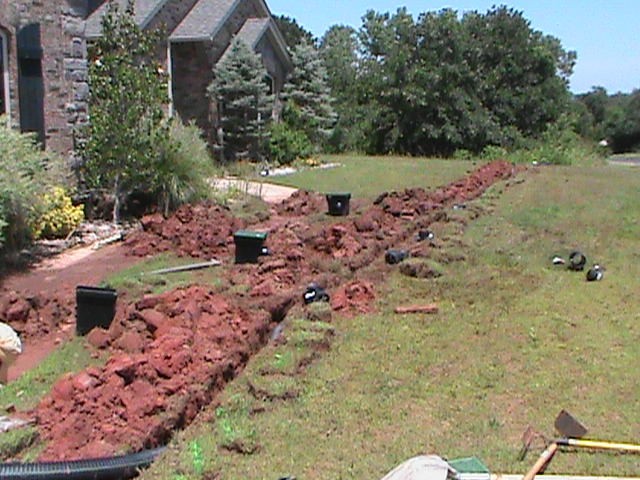 Sometimes Surface Drains make more sense when the Drainage Problem area is fairly small with Surface Water Flowing into it. 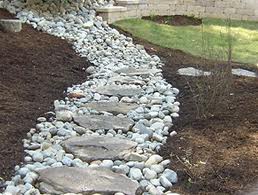