Wow, Some Drainage Problems are tougher than others.  Had a customer in Chickasha with an unusual Drainage Problem.  She had a new Driveway installed.  The Cement work was nice enough but they left out one major consideration when installing the new Driveway.  Even after a small rain the water would run right down the driveway, under the Garage Door and directly into the Garage.  This was a bad problem that was about to get worse.  The first big rain came and everything was magnified.  The Rushing water took out the garage door and the back wall of the garage.  Yikes!!

Hmm,?  What to do?  The company that installed the Driveway was nowhere to be found.  No surprise.

The water volume was huge and the customer had no means to redo the driveway which was substantial.

The solution took a little “Out Of The Box Thinking”.

This took place in July of 2017.  Since then not a drop of water has reached the garage. 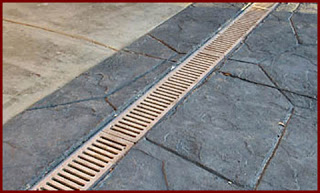 We put two French Drains under a larger version of a drain that looks like the above picture.

Drainage Systems can be made up of one drain or a combination of many drains.  Drainage  problems can be very complex.   Complex Drainage Problems may require a combination of several different types of drains all inter-connected and working together.  Other times the drainage problem may be simple and straight-forward requiring only one drain or several of the same type of drain connected together.

A simple Drainage System might consist of a Surface Drain that is connected to a second Surface Drain which runs to a Pop-up Emitter which lets water drain over the curb and into the street.

An “Exit Point” is the term used for where all the water leaves the Drainage System.  Determining the Exit Point is very critical.  It is one of the first things we do when diagnosing a Drainage Problem.