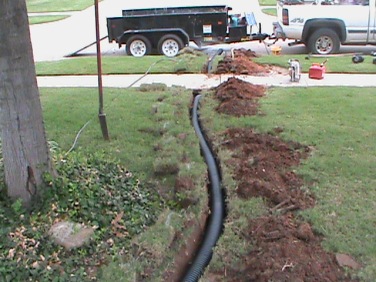 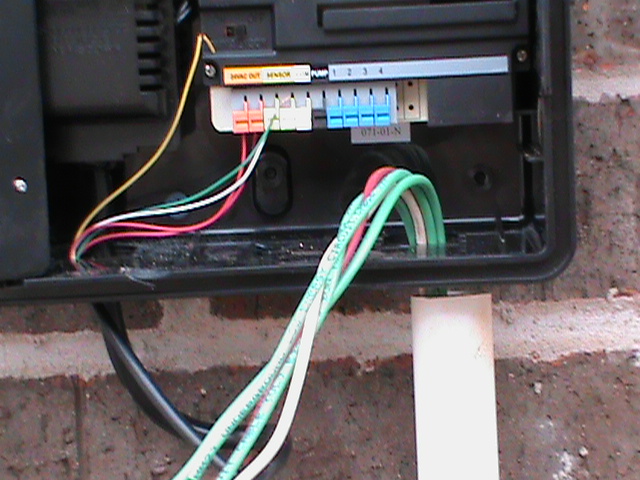 The sprinkler valve in the picture was replaced by Oklahoma Drainage and Sprinkler Repair. When the Sprinkler Valves were originally installed, they were not put inside a “Valve Box” to protect them. The company that installed them just dumped dirt on them and got paid and left. The Sprinkler System ran ok for about two years before the sprinkler valves failed. We replaced the valves and added a valve box to protect them so this time the Rain Bird valves should last much longer. If you need help with your sprinkler system, give us a call at 405 203 9419. Oklahoma Drainage and Sprinkler Repair has been solving sprinkler problems since 1993.

Do you need Sprinkler Repair?

Winter is a time when a lot can go wrong with a Sprinkler System.   Sprinkler Pipes can freeze and break.  Sprinkler heads can crack or bust.  Above Ground Back-Flow Valves can crack or leak even during a warm winter.  Oklahoma Drainage and Sprinkler Repair can help.  Give us a call at :

Having Installed Several Thousand Sprinkler Systems over the past several years, here are the most common mistakes made by homeowners who are not comfortable with their Sprinkler Controller.

Most Sprinkler Controllers have a knob or a digital touch screen.  Either way, the basic functions are the same. 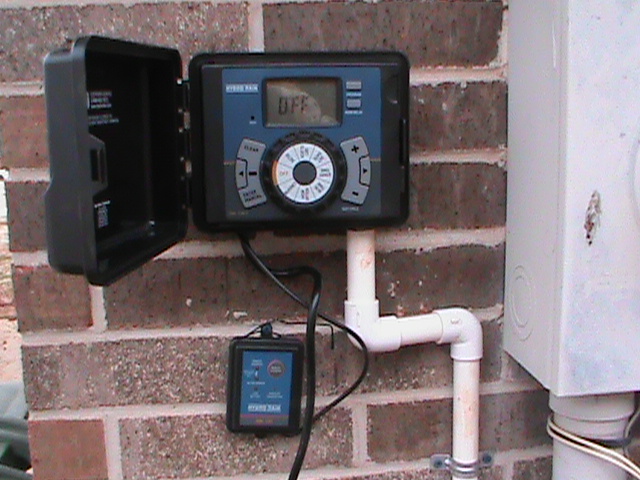 1.  Sometimes some brands of Sprinkler Controllers won’t work because the ” Time and Date,” have not been set correctly.  If you select time/date and the screen is blank with no time or date then you have a problem.

TEST YOUR OUTLET BY CHECKING YOUR BREAKERS OR PLUGGING SOMETHING INTO THE SOCKET SUCH AS A LIGHT OR A POWER TOOL.

Another very common mistake is that people confuse “Start Times,” with “Run Times” on the controller.

A Run Time is how long you program each Sprinkler Zone to run.

Sprinkler Controllers have the ability to run more than one start time.  This is to allow your entire Sprinkler System to run more than once in a 24 hour period.  You can have a Start Time of 1 PM.  Zone 1 comes on and runs until its programmed time elapses.  Zone 2 automatically comes on next and runs.  Then zone 3 and so on.  You might have a 2nd Start Time several hours later to start and run your entire system again.  (2nd start time at 8 PM)  The Sprinkler System has had plenty of time to run through all the zones when it started at 1 PM.  At 8 PM the controller turns zone 1 on again and all the zones run their programmed amount of time.  THE MISTAKE PEOPLE MAKE IS THINKING THAT YOU MUST PROGRAM A START TIME FOR EACH ZONE. ( YOU CAN NOT PROGRAM A START TIME FOR ZONE 2,3,4 etc.)  This is also apparent by the fact that most Sprinkler Controllers have a limit of 4 start times but can run more zones than 4.  Most Sprinkler Controllers can run 10 zones or more.

What causes a big problem is a when person programs a Start Time at 1Pm.  Thinking incorrectly that they need to program a Start Time for zone 2.  They enter a second Start Time for 1:15pm, and a third start time for zone 3 at 1:30 PM.  So here is what happens.  Say each zone is programmed to run for 10 minutes each.(Run Time)  Zone 1 comes on and runs at 1 PM.  At 1:10 PM Zone 1 stops and zone 2 comes on.  At 1:15 PM the second start time kicks in and tries to turn on zone 1 again while zone 2 has only been running for five minutes and the other subsequent zones have not run at all.  This is called an “Overlapping Start Time.”  With an Overlapping Start Time, Different brands of controllers do different things.  They are all bad regardless.  Some will run zone one over and over and over causing a flood.  Others will not run at all.

Most people only use or need one Start Time.

The “Water Budget Feature,” found on most controllers can cause problems with your Sprinkler Run Times.  Water Budget is a quick way to quickly change all your Run Times for all your zones at once.  Example  —  Out of the box, your new Sprinkler Controller will be set to 100%.  If you program zone 1 to run 10 minutes and zone 2 to run 15 minutes then if your water budget is 100% then that is exactly what they will run.  If you change your water budget from 100% to 200% now zone 1 will run 20 minutes and zone 2 will run 30 minutes and any other zone’s run time will run double of what it was programmed at 100%.  This is a great feature until you accidentally change your water budget to 900% and don’t realize it.  (or 5%)

IF YOUR RUN TIMES ARE RUNNING MORE OR LESS THAN WHAT YOU PROGRAMMED THEM FOR THEN CHECK THE WATER BUDGET.

Some of the older digital Sprinkler Controllers have an “Enter” button.  Any programming you do must be followed by hitting the Enter Button.  If you don’t hit it then programming that you think you keyed in is lost.  This is why the newer controllers don’t have an Enter Button.